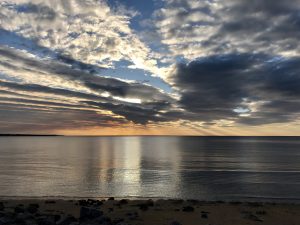 West is becoming synonymous with best for weekends away and when you’re blessed with the weather it’s not hard to see why! The Wild Atlantic Way lives up to the hype. This weekend’s target on the route was Sligo, the city and Strandhill,  for a couples getaway. My granddad hails from here and my family survived the famine hauling seaweed from it’s coast to farmers inland for fertiliser but shamefully it had been over a decade since I graced Sligo’s golden shores. 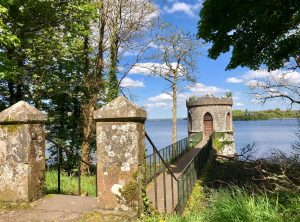 Going from east coast to west will set you back about three hours. Lough Key in Roscommon is my go to picnic point to break up the drive. I fell in love with it filming RTE’s Celebrity Operation Transformation there last year and was buzzing to be back again. There’s boat tours around the castle in the middle of the lake and places to eat if you haven’t pre packed your lunch like us nerds. 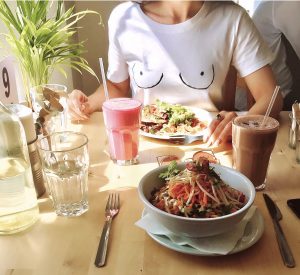 Sweet Beat Cafe is a vegan eatery right on the river in Sligo and was our first port of call for a feast after the drive, we weren’t disappointed. If you don’t believe vegan food can be filling let this place quash that myth for you. My formerly meathead fella chowed down on their lentil dahl and I had the mushroom quesadilla as well as smoothies. We both left stuffed to the brim, refuelled and ready for the rest of our adventure. I was pleasantly surprised to see they stock 3fe coffee, a favourite of mine that I didn’t expect to see outside the capital, I should leave more often. My titty top in this photo is available from Poppy Apparel and my discount code (which they let me pick myself) GIZDAH10 will get you 10% off any of their groovy gear.

Next stop was the check in desk at The Glasshouse (on the left in the photo above). This hotel is very central and offers underground parking for €3 a night which is handy. The gym was the only underwhelming thing about the place. It’s a small room with a few cardio machines and a great view but nothing at all for weight training. The staff were lovely, really helpful and there’s bizarre art thoughout. Breakfast boasted plenty of healthy options and our room didn’t disappoint either. The same weekend Stephen Fry was being investigated for blasphemy I noticed there was a bible in every room which I thought was an amusing reminder that we were “out Wesht”. 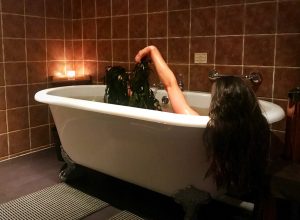 Seaweed baths in Strandhill followed by a pint of plain beside the beach was one of the most idyllic evenings I’ve had in a long time. My mum had been singing the praises of Voya Seaweed baths since she indulged with her sister a few years ago. We opted for the deluxe double bathing room which only set us back €60 for an hour of seaweedy solace. This includes a private room with separate seaweed baths and a steam shower each. Seaweed is brilliant for psoriasis which I suffer from occasionally. To get the full benefit from the nutrients in the seaweed it’s recommended that you pat yourself dry after and don’t shower for several hours. I left feeling like a silky mermaid and walked out to enjoy a stunning sunset on Strandhill beach. 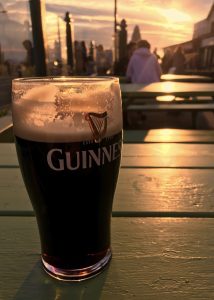 Being by the seaside for the evening brought on an intense craving for sushi and Miso sorted us out! It’s a two second stroll from The Glasshouse and good value for the amount of food we got. 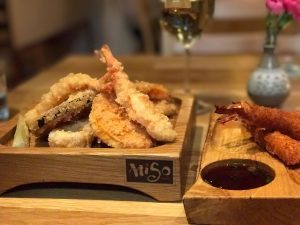 The saunter back to the hotel brought us by picturesque pubs on the river that the dwindling dusk drew people in to. I spied a few hen parties and can see why Sligo would be a popular destination for them with no shortage of pubs and so much to do in the surrounding area. 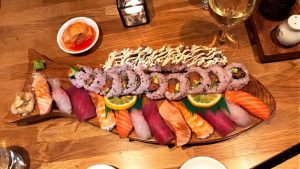 There’s a Coney Island in Sligo, not the one Lana Del Rey is queen of but it’s worth a spin out to and you CAN literally spin out to it! I noticed, what I thought was a mirage when I was driving from Strandhill towards the city, a line of cars cruising out to sea. The boy racer in me LOVED this! When the tide is low (you can check it by texting Coney to 53600 (from Republic of Ireland mobiles) or 81400 (from Northern Ireland/UK mobiles)) you can drive along the beach all the way out to the island. Obviously drive safely as there’s traffic coming two ways as well as cyclists and pedestrians. 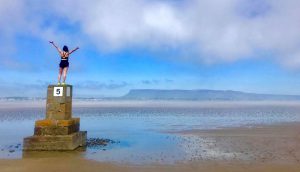 I’ll return to conquer the bizarre looking Ben Bulben (pictured above) as I’m on a mini mission to climb all of Ireland’s highest hills. Hopefully you get the ice cream weather we were lucky enough to land and if so, Mammy Johnston’s in Strandhill and Fabio’s in the city serve up seriously tasty sweet treats. There’s so much more of this stunning stretch of coast to explore. Until next time Sligo.