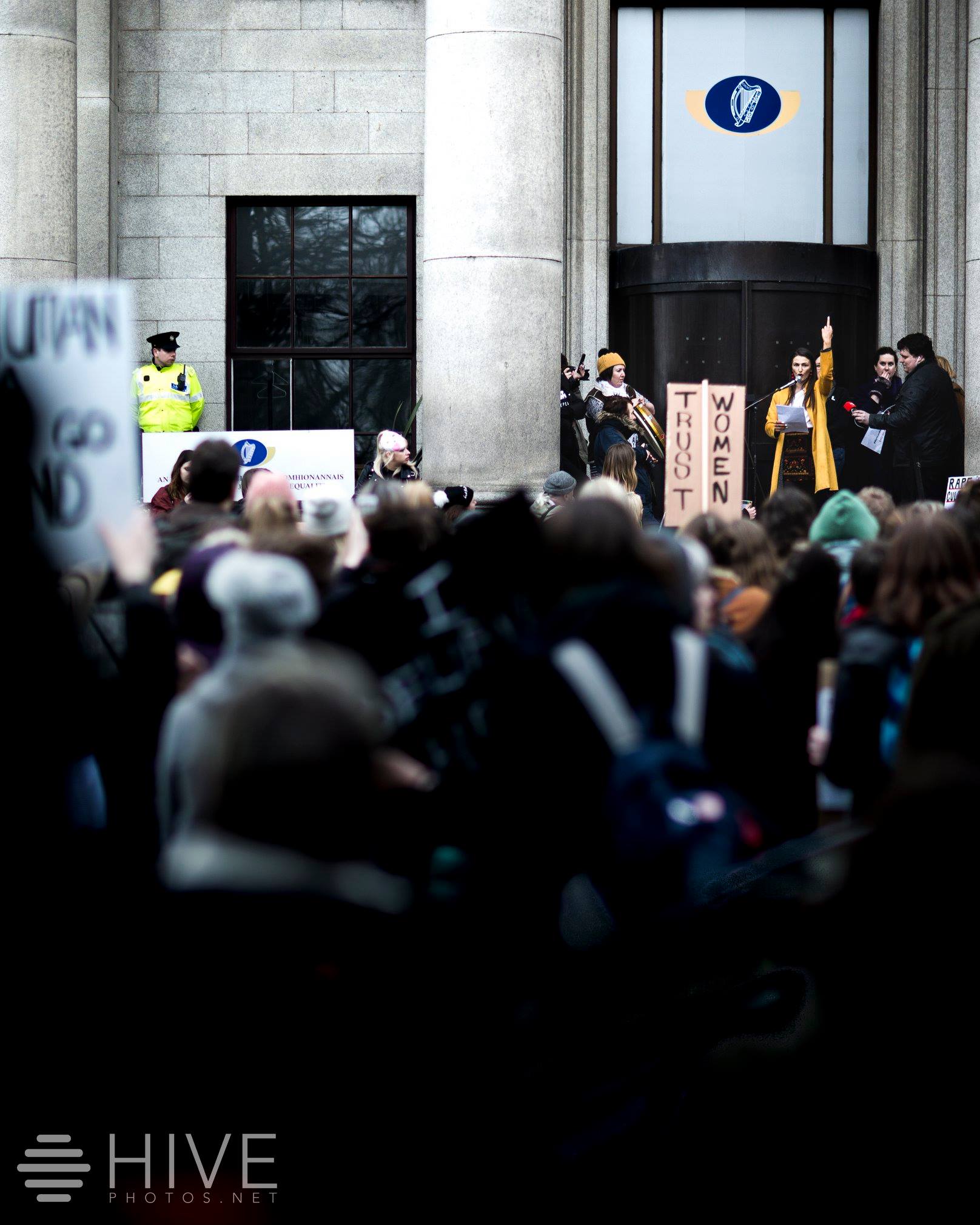 The script of Fionnuala Moran’s spoken word piece from the #IBelieveHer rally in Dublin on the 31st of March is below. The protest erupted in response to the verdict of the Belfast rape trial and more broadly to seek change to a justice system that systematically shafts survivors of sexual assault.

Hello, I’m Fionnuala Moran and excuse how nasal I’m going to be today, I’ve been too angry to sleep this week so now I’m really sick.

To give context to the words I’m about to say, the jury’s result led me to, very much accidentally, go public with my own story.

A tweet I posted which subsequently went viral read:

When I was 16 another rugby prick whose privilege knows no bounds took my virginity unconscious.

Then threatened me in to silence with his solicitor dad when I told the truth.

This is being a woman in Ireland.

Another rugby prick whose privilege knows no bounds took my virginity unconscious.

Then threatened me in to silence with his solicitor dad when I told the truth.

This is being a woman in Ireland.#IBelieveHer

So Paddy, we know you’re watching, and “You’re so vain I bet you think this march is about you, don’t you?”

But it’s bigger than you, it’s all of us, every victim.

So without further a do…

Heard the verdict of the jury, wept over a system inept.

And that set me free.

See 16-year-old Fi wasn’t to know this isn’t the way things have to be.

Getting threatened sadistically by my attacker after he

Was rejected by local lasses who heard the fuss, knew the suss

And as a result denied him their puss.

But boys will be boys.

Than a victim receive any justice for the most dehumanising attack?

Can you defame a self-decimated character?

Lacerations regardless of incarcerations sent vibrations of disgust across the nation

But you have the audacity to cry defamation?!

The privilege is white but humour is black, in paint and in spirit.

If you’re repulsed let me HEAR IT!

But boys will be boys.

“No HPV vaccine for yee!”

“You who’ve had sex already.”

So nine years later when my first cervical smear

But boys will be boys eh?

Boys will only be boys as long society allows them to treat women like toys.

but that shit’s present tense to me!

The closest thing to sex ed we see.

‘Cause what the fuck is this?

And then the tenacity to claim a good man’s tweets are defamatory?

When you’ve already got off scot-free?!

And that’s the epitome of white male privelege, see…

Prove it says the law to me then we’ll see

But beyond reasonable doubt…!

Bile stirs at the vile whir of the fabric of lies defence barristers spin to allow the perps win.

but the court system says tough…

Let’s resort to wearing body cams once we’re out of our prams.

So tell me is the system broke?

Ireland I LOVE YOU! But it’s unrequited.

Our taxes you take

But our hearts you break when we try to take our turmoil to trial,

Are we taking the piss?!

Looong before we could see

On our bodily AUTONOMY.

Handmaiden’s Tale extras we did not agree to be!

But that’s just the way it is… Nah!

But that’s just the way it isn’t, because we’re here and no longer fear the jeer of a ‘lad banter’ poisoned peer.

To every innocent man I’ve ever incriminated looking over my shoulder,

When the nights got a bit colder,

“I see you! And will put my key through you if I have to!”

“Darling lovely, that only happens in the lawless suburbs not our leafy ones!”

Where you have funds to silence the unfortunate huns that cross paths of your privileged sons.

Ladies, blind to your misogyny,

how privileged you are to be… ignorant,

To the fact it could at any stage be you or me helplessly having to give testimony.

The fault does not lay with me but me but with he!

And consent can be revoked at any moment.

But if you disagree feel free to sort yourself out for the rest of eternity.

The only “Asking for it” anyone can do is enthusiastic consent,

Anything less and we wish it was to prison you went.

This is not the latest feminist fodder for Twitter trolls to trivialise, these are our lives!

We inhabit a society complicit with protecting the perpetrators that cause the pain unconsenting penetration produces.

Share your stories if it serves you and it is safe to do so.

Share your stories if you think the support will outweigh the slut-shaming.

Share your stories if it will revoke the power the rapist has on you long after your physical ordeal is over.

Share your story if you think being heard will extinguish the mental anguish a society that tells you to “Shut up!” causes you to suffer.

For the amount of people who’ve said to me,

“You’re the exception! Not who I’d expect to see…”

What? Because I’m doing well despite what he did to me?!

Who do you expect to see and why isn’t your faceless average rape victim not me, or he, or she?

May they fear the fury you feel today

and QUAKE in their boots,

Whatever pitch, office or alleyway they prowl.

And the next time someone DARES utter

Closing the #IBelieveHer march yesterday. What a supportive crowd and what an important issue to tackle at this moment in time. ‪Here’s to all survivors of sexual assault seeing change in a society that systematically shafts them.‬